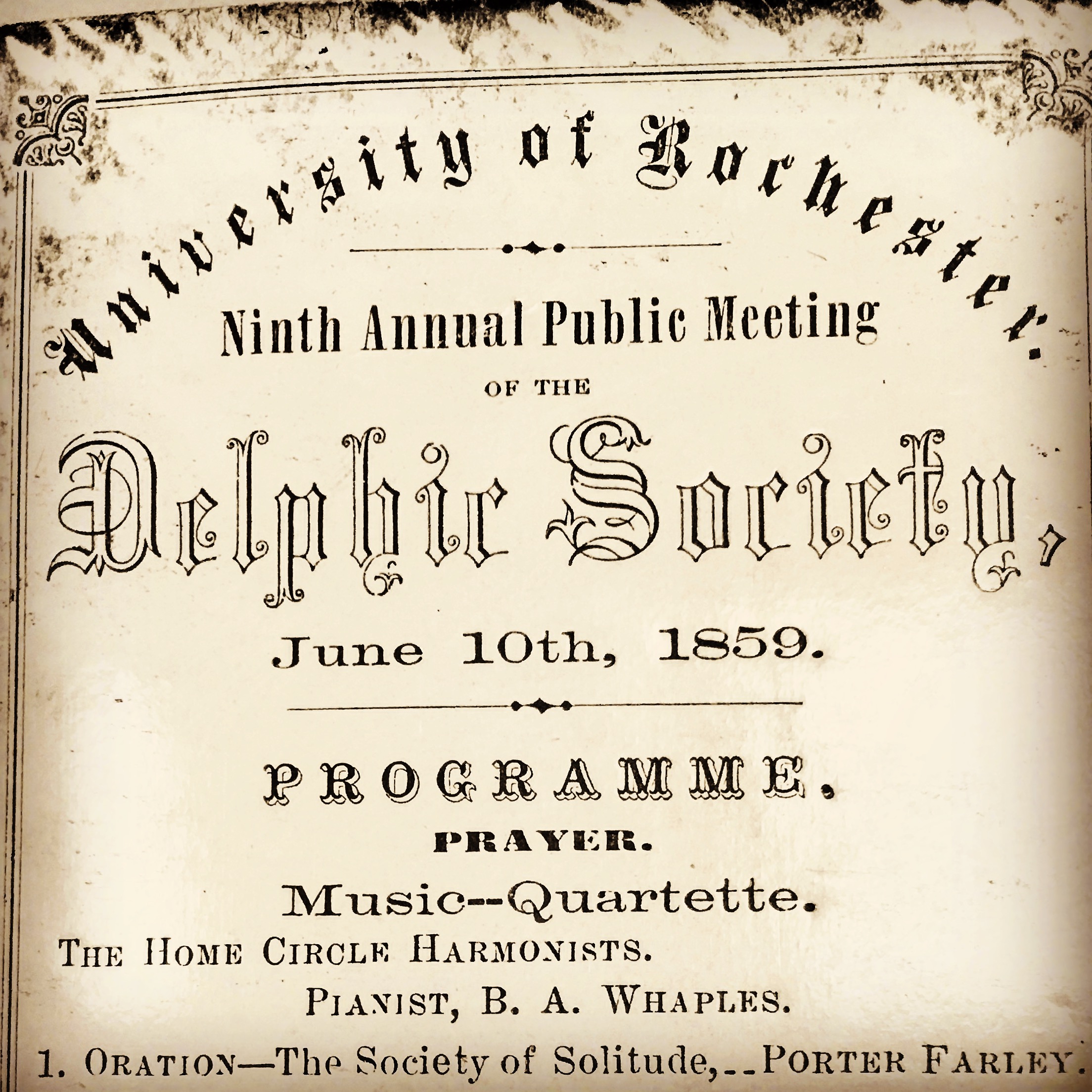 The History of the Delphic Fraternity

The Delphic Fraternity was founded on October 13, 1871; the original formation being the Delphic Society at the Geneseo Normal School, today SUNY Geneseo. During the early 1900s, Delphic became a regional fraternity with seven chapters in New York and one in Pennsylvania.

The Epsilon Chapter of the Delphic Fraternity at the Cortland Normal School (today SUNY Cortland) traces its local origin to the Young Men's Debating Club founded in 1847.

The Delphic Fraternity was originally founded in 1871 but its history dates back to 1847 making it one of the oldest existing social fraternities in the United States. If we used 1847 as an organizational founding date, the fraternity would be the 16th oldest in the US, according to Wikipedia's list of social fraternities.

Delphic Society at the University of Rochester

The connection came to light with the confirmation of Mr. William J. Milne as a founding member of the Delphic Society at Geneseo in 1871. Professor Milne came from the Brockport Normal School along with students who transferred to Geneseo to become part of the first graduating class. Milne was previously involved with a literary society at Brockport. Milne first experienced literary society debates and exercises while he was a student at the University of Rochester. At Rochester, Milne participated in the last public debate sponsored by the Delphic Society in December 1866. He graduated from the University of Rochester in 1868. Milne was then a member of the teaching faculty at Brockport for a few years before being appointed the first principal of the Geneseo Normal School. The school opened its doors to students in September 1871. 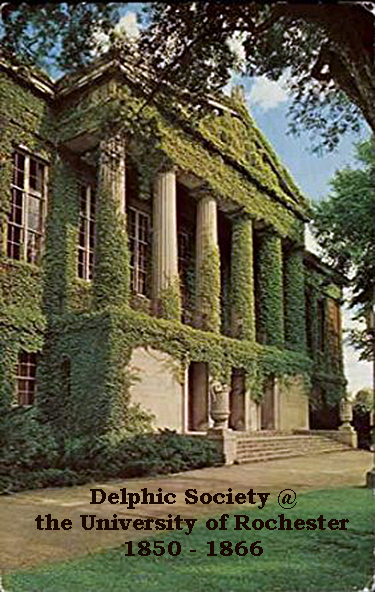 Delphic of Gamma Sigma Tau Fraternity is proud to announce the official formation of the NYC Professional Graduate Chapter. The new graduate chapter has initiated three new members and looks forward to future events in the NYC area. The organization would like to also welcome two undergraduate associate chapters: the SUNY Delhi Associate Chapter and the Lincoln University Associate Chapter. Our members in Delhi, NY and Oxford, PA are excited to re-establish active undergraduate chapters of our fraternity in the states of New York and Pennsylvania. The future of the Delphic Fraternity is looking bright. Del - phi! 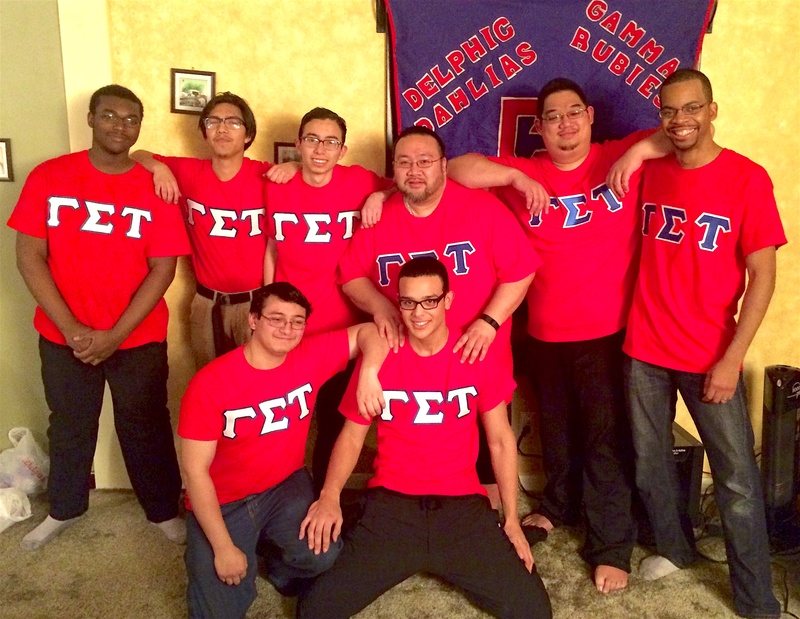 Here are founding Delphic Brothers that make up the NYC Graduate Chapter and the Associate Chapters at SUNY Delphi and Lincoln University in Pennsylvania. (Photo from a joint crossing event in New Paltz, NY, February 2016.)

Here's a close-up shot of a photo taken by Delphic Brother Komain and Little Sister Christina at the SUNY New Paltz Alunni House. Next time you find yourself on campus visit the Alumni House to get a real close-up look at the historic art work. 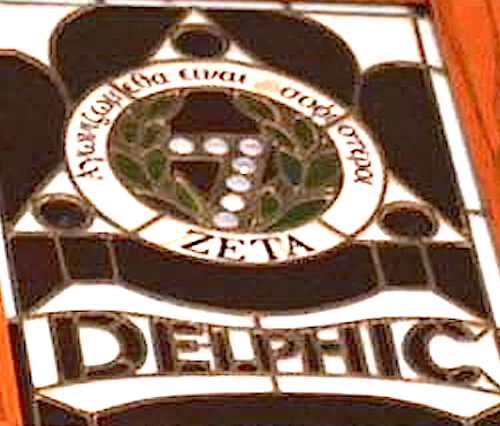 What do you think of the template redesign to the History Homepage? / Happy 142nd Anniversary!

The template to the Delphic Fraternity History Homepage has been redesigned. We don't change our template very often, generally trying to stick with a theme that expresses age and history. We would love to hear what you think of the redesign and what you would like to see on the website in the future. Feel free to share your thought by repsonding to the blog post.

We hope you like the changes. The revamp comes about two weeks after the organization became 142 year old.

We have added another Notable Delphic Alumni to the Delphic Fraternity Wikipedia Page, thanks for the incredible research conducted by our Brother Eric Guzman. Dr. R. Paul Higgins, Sr. was a prominent physican and higher education officer from Cortland, NY. He was a member of the Young Men's Debating Club, which later became the Epsilon chapter of the Delphic Fraternity. Higgins Hall on the campus of SUNY Cortland is named after Dr. Higgins. A special shout out to the Cortland County Historical Soceity for the wonderful information on Dr. R. Paul Higgins, Sr. and for the copy of his historic photo.

A Wikipedia page was created for one of the Founding Fathers of The Delphic Fraternity: John Beach Abbott. He was a New York attorney, county judge, and Democratic Party leader. For more information about John B. Abbott, visit his Wikipedia Page at:

The Delphic Fraternity was founded in 1871 in the state of New York. The fraternity can trace its organizational history back to the origins of the Epsilon chapter in Cortland, the Young Men's Debating Club formed in 1847. The organization knew the Cortland chapter was a debating club prior to becoming part of the Delphic Fraternity, however the actual founding date of the club was guestimated to be around 1842. An old article found online recently from the Cortland Evening Standard dated April 12, 1895 lists the names of prominent club alumni and confirms its founding year to be 1847. The new information has been added to the Delphic Wikipedia Page and this Delphic Fraternity History Home Page. Historially this is a great find and truly illustrates our organization's rich history. So, The Delphic Fraternity, Inc.: 140 years of brotherhood - 165 years of history.

Our list of notable alumni on our Wikipedia page has been updated. Check out the list here...